Including world's largest sapphire - and the one that will never be sold
הדפס
3.09.2017Gems and Jewelry

Sapphire, the birthstone of September, is a beloved gemstone. Its blue color, which is reminiscent of the sky and the ocean, has made it very popular over the years. The sapphire’s scarcity, color and unique attributes have earned it prominence among crown jewels, and sapphires can be found embedded in crowns, scepters and royal jewelry.

The sapphire that will never be sold

One of the most precious sapphires in the world is unlikely to ever be sold. St. Edward’s Sapphire is an octagonal, cushion-cut sapphire that forms part of the British Crown Jewels and is, in fact, embedded in the crown itself. The stone has been in the royal family’s possession from at least 1042 CE, and its weight is unknown. The back of the crown base features the Stuart Sapphire, which weighs 104 carats.

The largest sapphire in the world

The largest sapphire in the world is the Star of Adam, an oval-shaped blue star sapphire, which was dubbed for a unique quality by which, under a certain light, the gem radiates a six-pointed star-shaped reflection.

The name given to the sapphire comes from the Muslim belief that after the expulsion from the Garden of Eden, biblical Adam arrived at Sri Lanka, and the tears he shed seeking forgiveness from God became gemstones.

The Star of Adam was discovered in 2015 in Ratnapura, Sri Lanka, known by the nickname “city of gems.” While its owner remains anonymous, the 1,404.49 carat sapphire’s worth has been estimated at nearly $200 million.

The world’s most famous sapphire ring is, without a doubt, the engagement ring that Charles, Prince of Wales gave Lady Diana Spencer in 1981. The ring, whose design was later named for Diana, comprises 14 solitaire diamonds surrounding a 12-carat oval blue Ceylon sapphire, set in 18-carat white gold.

The ring was designed by the House of Garrard, a veteran British jewelry company founded in 1735. At the time, the £28,000 ring was not considered particularly special, as it was simply included in a selection of rings presented to Diana. Some have speculated that Diana chose the design because it reminded her of her mother’s engagement ring. After her tragic death in a car accident in 1997, her son William inherited the ring and gave it to his wife, Catherine Middleton, Duchess of Cambridge.

Surprisingly, sapphires and rubies are almost identical in their chemical composition and crystallization. The two stones belong to the corundum gems family, which consists of a crystalline form of aluminum oxide, which in its pure primary state is completely colorless.

Rubies and sapphires differ in color over small changes in their internal composition: Rubies get their color from the presence of chromium, while sapphires get it from the presence of iron oxide and titanium. The amount of titanium plays a key role in determining the gem’s blue shade, with “royal blue” being the most sought after and most expensive sapphires.

The rarest sapphire in the world is not blue

The word “sapphire” immediately conjures up the image of a blue gem, but sapphires appear in nature in other colors as well, including orange, yellow and green. Among colored sapphires, the rarest and most precious ones combine orange, red or pink hues. They are called Padparadscha sapphires, a term that means “lotus blossom” in Sinhalese. These stones are usually found in Sri Lanka, and are typically snatched up quickly by collectors.

Much like diamonds, large and unique sapphires are also named, usually after their owners.

• The Logan Sapphire is a flawless, cushion-cut stone of a rich, deep blue color. The second largest blue sapphire in the world, the gem, cut from a crystal mined in Sri Lanka, weighs 422.99 carats. It is set in a brooch surrounded by 20 brilliant-cut diamonds weighing 16 carats in total. The Logan Sapphire is named after Mrs. Polly Logan, who donated it to the Smithsonian Institution in 1960.

• The Rockefeller Sapphire, named for the famous industrial family, is a 62.02-carat, rectangular step-cut, internally flawless, cornflower blue sapphire of Burmese origin, set in a platinum ring with cut-cornered triangular-cut diamonds. John D. Rockefeller Jr. bought the sapphire in 1934 from an Indian maharajah, and the stone has since broken several auction records, most recently fetching a record price of over $3 million at a 2001 Christie’s auction in New York. 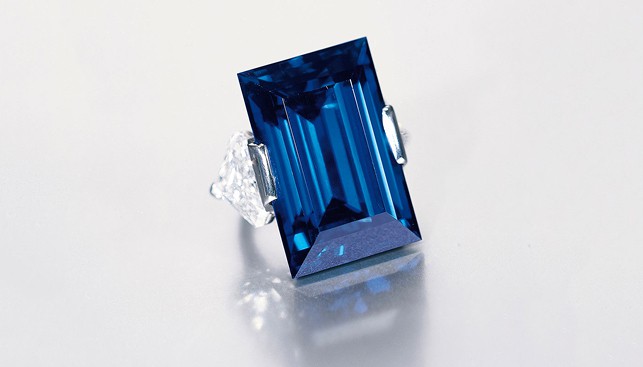 Go to our homepage for a gallery of stunning Sapphire stones

We use cookies to ensure that we give you the best experience on our website. If you continue to use this site we will assume that you are happy with it.Ok