The Hardest Material Found in Nature

Diamond, April’s birthstone, is the gem that must adorn every bride’s engagement ring. The diamond is unique not only in its appearance, but also in its properties.

Origins of the name diamond

in Hebrew, the name diamond –”yahalom” – refers to the gem’s hardness. Diamonds are mentioned in the Old Testament three times, all related to the Hoshen breastplate – a gem-adorned ceremonial breastplate worn by the high priest of the ancient Israelites. It is unclear whether the gem referred to as “diamond” among the Hoshen stones is the same diamond known today, since there is no archeological evidence to support that theory.

The name “diamond” is derived from the ancient Greek’s “adamas”, meaning “invincible” and “unbreakable”. The meaning of the name in English is “brilliant gem.”

Indian royals wore diamonds as far back as 3,000 years ago, believing they would help them live forever. Many European kings used diamonds in their crowns believing they lent their power to the wearer. Louis XIII of France, who reigned between 1610 and 1643, even decreed that only kings could wear diamonds.

In Italian, diamonds are referred to as “Amante de Dio”, literally meaning “God’s lover,” which may explain why they are the preferred gems for wedding rings. According to tradition, a diamond given as a gift can inspire affection and love between a husband and wife – hence the choice of diamonds for engagement rings.

The first written testament pertaining to the use of diamonds dates back 3,000 years, to India: diamonds were apparently first discovered in the Golconda region and in ancient times, India was the world’s sole source of diamonds.

In 77 AD, Plinius described diamond crystals, which arrived from India, as having the shape of two pyramids, joined at the base. Marco Polo was the first to introduce diamonds to the West, when he returned from China in the 13th century. Seventeenth century French merchant Tavernier returned to Europe from trips to the East bearing quality diamonds. Tavernier named India’s Hyderabad as the diamond trading center of the period and his book details the ways diamonds were mined.

India remained the world’s only source of diamonds until 1725, when diamond deposits were discovered in Minas Gerais in Brazil. Diamond production in Brazil peaked between 1844-1871, but the intensive harvesting eventually depleted the deposits.

Modern diamond mining began in the late 1800s, with the discovery of deposits in South Africa. Diamonds were first discovered in South Africa around 1859 and between 1866 and 1869 large deposits of diamond were found on the banks of the Orange River.

Diamond explorers flocked to the area and, in 1888, De Beers Consolidated Mines was formed. De Beers soon took over diamond exploration in South Africa, as well as in other parts of the world, and proceeded to dominate the rough diamond markets until the mid 1990s. Today, De Beers dominates about 40% of the world’s rough supplies.

While diamond mining in South Africa began as a riverbed-based operation, miners soon discovered that the diamonds found on riverbeds originated from underground kimberlite pipes, which they then began exploring.

In 1954, the first diamond deposits were discovered in Russia’s Sakha (Yakutia) Republic. With the disintegration of the Soviet Union, Russia formed Alrosa – the state-owned diamond company, which now dominates Russia’s diamond mining and trade.

No new major diamond deposits have been found across the world during the first decade of the 21st century. Diamond mining nowadays take place in South Africa, Canada, Russia, Australia, Namibia, Angola, Congo, Ghana, Sierra Leone and other African countries.

The majority of the world’s diamonds are harvested via open-pit, riverbed and kimberlite pipe mining, although underground and marine mining are also practiced. The latter is common off the shores of Namibia, where the seabed is dragged in search of diamonds.

Diamond polishing is the process of shaping the stone in a way which enhances the reflection of light and enables it to be to set in jewelry. Rough diamonds have no natural shine. Polishing takes off about 50% of the stone’s original weight and size.

The lapidary decides on the best way to cut a rough diamond. A round cut, also called the “brilliant cut”, is considered optimal for diamonds. The round, 58-sided shape, was first introduced by 17th century Venetian diamond cutter Vincent Peruzzi. The modern brilliant cut was prefaced by Belgian diamond cutters Marcel Tolkowsky, and later became known as the “ideal cut”. Other popular diamond cuts are the baguette, emerald, pear, princess, heart and marquise.

The cutting process can take between several hours and several months, depending on the rough diamond. India and China are considered the world’s diamond cutting and polishing centers, especially for small diamonds. Israeli diamond cutters specialize, for the most, in larger diamonds.

Rough diamonds were set in rings as far back as Roman Times, although they did not enjoy the same popularity they do today, taking a back seat to gemstones and pearls.

The rich and affluent of the Middle Ages used gem-set rings in weddings, and the first record of a diamond ring used in a wedding ceremony dates back to the 15th century. Mary of Burgundy was said to be the first to receive a diamond engagement ring from fiance Maximilian I of Habsburg, later to be crowned Holy Roman Emperor (1508-1519).

At the time, diamonds were valued for their ability to withstand the effects of fire and steel and were believed to inspire eternal loyalty and love. During Renaissance times, diamonds were set in jewelry in their natural form and were rarely polished.

Diamonds began gaining popularity in the late 1800s, after their discovery in South Africa. It was during that time that the custom of presenting a bride with two rings – a gem-set engagement ring and a smooth wedding ring – began.

As polishing methods evolved and diamonds supply increased, setting round diamonds in engagement rings became popular. New York jewelers Tiffany’s were the first to introduce the solitaire setting – a single diamond set afloat and held by six prongs. The design, which left all sides of the diamond exposed to light, enhanced the stone’s lucent qualities as well as its cut, clarity, color and carat, and would later inspire the 4Cs grading system. 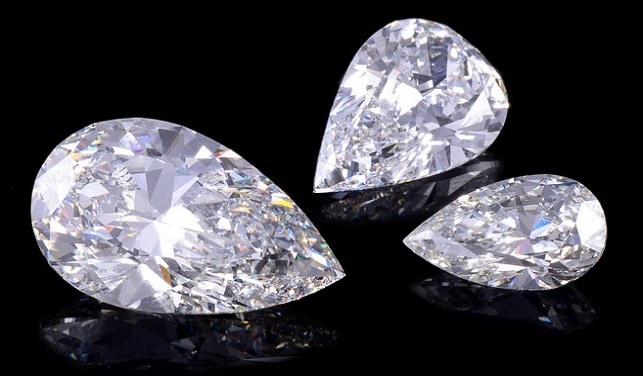