Unique Gemstone because of its color effect

Opal, a multicolored gemstone, is October’s birthstone. Its name comes from the Greek word “opallios,” which means “alter” after its changing colors, and indeed, opals are distinguished by their bold and bright colors. The darker and more multicolored the gem, the rarer and more expensive it is.

an opal cut including the matrix bolder.

Hope, faith, and good luck. The belief that wearing an opal changes a person’s luck comes from the stone’s changing color play. In Roman times, it was believed that opals brought good luck because they showed all the colors of the rainbow. In Europe in the Middle Ages, blonde women believed that wearing opals would preserve their hair color. In contrast, at different times belief has held that opals bring bad luck because of their fragility. Opals break and scratch easily, making them hard to work with, and are sensitive to temperature changes, wear and tear, and harsh chemicals.

It is recommended that owners of opal jewelry clean their jewelry using a dry cloth and keep them away from perfumes and harsh chemicals. The jewelry should be rinsed in clean water from time to time.

The opal is identified with the jacinth, one of the 12 stones in the breastplate of the High Priest. The opal was associated with the Dan tribe, but it is impossible to know for certain whether the stone known then as an opal was the same opal we know today. Rabbi Eliyahu HaCohen, who lived in Izmir, Turkey in the 17-18th centuries, associated the opal or jacinth in his book on the stones of the High Priest’s breastplate according to Midrash Talpiyot.

Australia, the Czech Republic, Slovakia, Hungary, Mexico, and the US. Opals are found in volcanic rock and in sedimentary boulders, deep inside the veins. They are most frequently found just below the surface and therefore the heavy equipment required to mine diamonds is not necessary to recover opals.

Special Qualities of the Opal

The opal is unique because of its color effect, which looks like bits of pure rainbow in a wonderful natural composition. The black opal, despite its name, is not black. The stone’s dark background is comprised of deep shades of purple, green, or blue and it contains flashes of bright colors. The darker the stone and the more varied its color play, the rarer it is and the more it is worth. Black opals are considered the most valuable.

A white opal is identical to a black opal in its chemical composition, but the color flashes are seen on a light background. White opals generally contain less color play because the human eye perceives mixed colors as white.

The clearer the color definition is, the rarer and more expensive an opal is.

Qualities of the Opal

Important criteria for grading gemstones like hardness, resilience, and refractive index are not relevant to the opal stone. The opal is a relatively soft stone, nearly 6 on the Moh’s Scale, with a refractive index of 1.44-1.46. What make the opal a coveted gemstone are its stunning colors, which look like someone dropped oil into water, an effect similar to that seen in soap bubbles.

The opal is amorphous. It does not form through crystallization, but rather hardens between two rock layers, which give it its shape.

The opal’s chemical structure is what gives the stone its special colors. The opal consists of silica and water, but its internal structure creates its beautiful hues. Basically, the opal is formed from tiny balls of silica of a microscopic size. The balls lie on top of each other in thin layers, which refract the light that hits their surface into all the colors of the spectrum. The light is then reflected back to the eye as a flash of a specific color. When seen from a different angle, the color sparkling from a given layer will change. The size of the silica balls is what determines what color each layer will give off – when the balls are not a uniform size, the light is refracted differently by each one and the color will appear different in each ball.

Black opals contain silica balls of the same size that sit in layers that are thick enough to be seen by the naked eye. Black opals consist of 6-10% water, while other opals can contain as much as 20% water.

History of the Opal

Opals were known in Europe as far back as Greek and Roman times, and came from the area that is today Hungary, Slovakia, and the Czech Republic. During the English Renaissance, Queen Elizabeth I and all nobles and prominent members of society had opal jewelry, and the opal is even mentioned in Shakespeare’s Twelfth Night. At the beginning of the 19th century, the value of opals dropped by more than 50%, after Sir Walter Scott published a piece of work in 1829 associating opals with bad luck. In 1877, large opal deposits were discovered in southern Australia which overtook the Hungarian opal mining that had been prominent until then. The Flame Queen – an opal weighing 253 carats – brought fame to Australian opals. 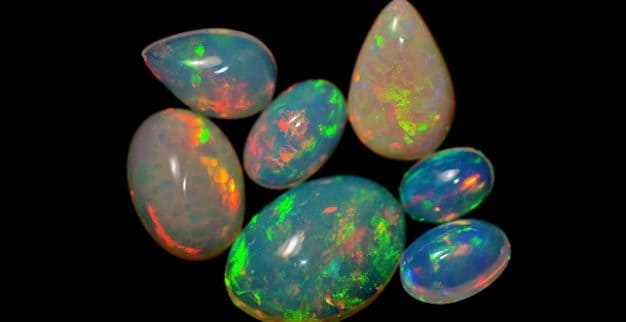