A compound of magnesium iron silicate

Peridot, August’s gemstone, is an unusual gem that exists in only one color – a vivid olive green, which is reminiscent of the colors of springtime flora. Known in Hebrew as her “Ptada,” this gem is also unique in that its color does not change even under artificial light.

Origin of the Name Peridot

The name “peridot” is believed to be derived from the Arabic word ‘faridat’, which means ‘gem’, or from the Greek ‘peridona’, meaning ‘bestow wealth’.

Other names for peridot are ‘Chrysolite’, a Greek word meaning ‘goldstone’, referring to the gem’s golden shine; and Olivine, after its mineral group.

One of the gems embedded in the Hoshen breastplate, a ceremonial piece worn by the high priest of the ancient Israelites was Pitda. Over the year, the name has been translated into ‘Topaz’, but according to Roman author Pliny the Elder (58 AD) this topaz was a green gem, most probably peridot, which was indigenous to the area near the Land of Israel.

Characteristics of the Peridot

The peridot is a unique gem, in the sense that it only appears in one color – green. Its lively green color is also exclusive in the fact that it does not change under artificial light.

The peridot is a hard gem to polish because its refractive index is very low, which means the stone may shatter during the polishing process.

In the past it was believed that peridots could fight and drive away demons. Peridot is also considered helpful in easing thirst during illness. The gem’s bright green color is said to contribute to a good mood.

History of the Peridot

In his book, Pliny the Elder describes a green gem named ‘prasoides’. He quoted another author – Archelaus – as saying the gem’s origins are from the Red Sea island of Chitis. And indeed, the Emerald Island, just off the Egyptian coast, was a source of peridots in ancient times.

Peridots were brought to Europe from the Middle East by the crusaders, and for a while were mistaken for emeralds. Peridots were subsequently inducted into the Church’s treasury. 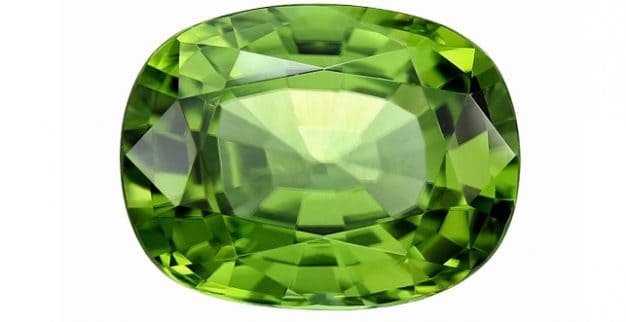