Most often shades of yellow

Topaz, November’s birthstone, has a hue reminiscent of the color of leaves in the European autumn or the splendor of Indian summer. Topaz gems have a complex mineral structure, which makes them difficult to process.

Origin of the Name Topaz

The origin of the name “Topaz” is unknown, although there are a number of theories. One posits that the name comes from the Sanskrit word tapas (fire), which could refer to the stone’s color. Another theory is that the name comes from the Greek name, “Topazus,” of St. John’s Island in the Red Sea on which rare gemstones were once found. The island was shrouded in fog and difficult to find. The word topazus means “to search” and could have been the root of the name of the island and the stone.

The Topaz in Judaism

The second stone in the first row of the breastplate of the High Priest is the fateda, which could be the modern-day topaz. “You shall make a breastpiece of judgment, the work of a skillful workman; like the work of the ephod you shall make it… You shall mount on it four rows of stones; the first row shall be a row of ruby, topaz and emerald…” (Exodus 28: 15-21)

Rabbi Eliyahu HaCohen, who lived in Izmir, Turkey in the 17th-18th century, elaborated on the stones of the High Priest’s breastplate making the association of the topaz with the Tribe of Shimon and mentioned that the stone had the power to cool the body.

Characteristics and Healing Powers of the Topaz

Throughout the years, many magical powers have been ascribed to the topaz, with people believing the stone had the power to overcome sadness; grant courage; calm passions; strengthen love; confer wisdom; banish evil powers and cure many diseases. The many beliefs and superstitions attached to the topaz confirm the stone’s importance.

The topaz stone is a very complex mineral and despite its high hardness grade (8) breaks easily with a light blow along the crystal’s length, which causes the stone to split perfectly. When setting the stone, it is necessary to take care not to apply pressure so as not to break it.

There are a few kinds of topaz. The most expensive are yellow-brown to reddish topazes. Some believe that the topaz was chosen as the November stone because its color recalls the color of the leaves in the European autumn and the glow of the Indian summer.

The topaz is found in Brazil, Mexico, California, Texas, Sri Lanka, Myanmar, and Russia, as well as in number of African nations, including Nigeria.

One of the most famous topazes is a stone that was incorrectly assumed for many years to be a diamond and was even called the Braganza Diamond. This topaz is part of the Portuguese crown jewels. 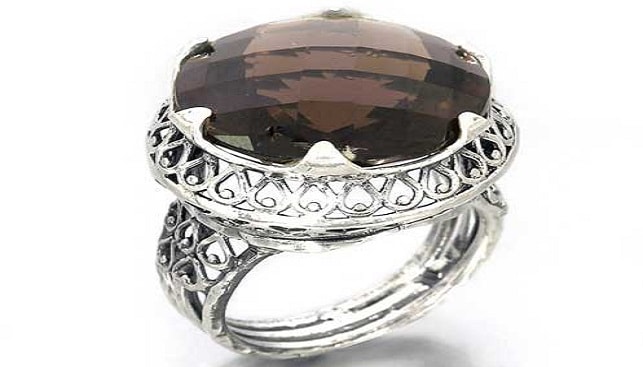