Turquoise, a vibrant blue-green gemstone, is December’s birthstone. Turquoise is the oldest gem in the world, and it has been found in archaeological excavations dating back to the Neolithic Age, about 8,000 years ago. Turquoise is especially sensitive to chemicals.

Source of the Name Turquoise

Turquoise was brought to Europe from Persia via Turkey. The Europeans erroneously thought that the gemstone came from Turkey and called the stone “turkey.” The name was changed by the French and remains “turquoise.”

Qualities Associated with the Turquoise

The ancient Persians believed that the blue stone would help overcome the Evil Eye. The Persians would weave turquoise stones in horses’ manes or tails to protect them. In Europe, turquoise rings were an accepted memento gift, and it was also believed that the stone held the power to prevent injuries and broken bones.

Turquoise is easy to mine and is found in veins close to the surface. Turquoise is found mainly in dry and desert areas. Today, it is mined in Iran, Tibet, China, and in the US states of Texas, New Mexico, Colorado, Arizona, California.

Polishing turquoise is complicated. The stone is naturally porous and hard to polish and process. The ancient Persians discovered ways to process turquoise that are still used today. In addition, turquoise is sensitive to chemicals and should be cleaned using hot soapy water only.

History of the Turquoise

Turquoise stone is the oldest known gemstone in the world. Turquoise stones have been found in archeological excavations from the Neolithic period – some 8,000 years BCE. Turquoise appears in cultures as varied as ancient Persia (modern-day Iran), South America, and ancient Egypt. Turquoise jewelry has been found in the graves of Egyptian pharaohs, as well as in boulders in the Sinai desert, where the ancient Egyptian had mines dating back as far as 6,000 years. The Egyptians would grind turquoise into powder and use it as eye makeup.

In the Aztec culture, which dominated Mexico in the 15th and 16th centuries, ritual pagan objects were set with turquoises. Europe saw a growing demand for turquoise jewelry from the beginning of the 19th century. 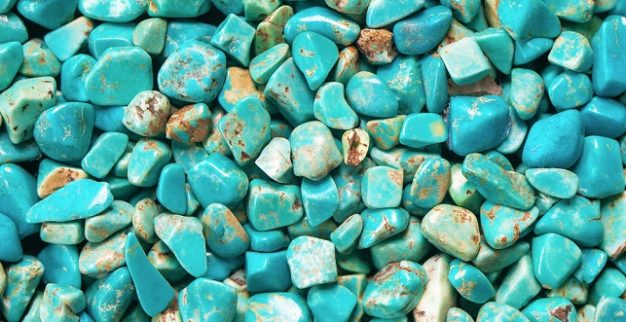