Emerald birthstone of May

Emerald birthstone of May

Emerald, a green gemstone, is May’s birthstone. Emerald are mined in different sites around the world, but its uniqueness stems from the fact that its shade and the quality of its inclusions can reveal which region of the world it comes from.

Origin of the Name Emerald

Emeralds are mentioned several times in the Old Testament. The gem was one of the Hoshen stones – the gems adorning the ceremonial breastplate worn by the high priest of the ancient Israelites – and is associated with the Tribe of Levy. Nevertheless, since none of the Hoshen stones are depicted in detail, it is hard to know whether the biblical emerald is the one we know today.

According to Jewish Midrash, the Tribe of Levy, which was chosen to serve God in the Temple, was given the gem as a sign of their wisdom and devotion. Both the Talmud and Midrash associate emeralds with intelligence and wisdom.

Attributes and Healing Properties of Emeralds

Emeralds are said to possess several healing attributes: they are supposed to alleviate stress, back pains and respiratory and eye problems, promote physical, mental and spiritual balance and bring the wearer good fortune.

The Roman senator Pliny the Younger mentions the use of emerald jewelry throughout the roman world and the East. Later, emeralds were discovered in South America, by the Spanish.

Emeralds are often mentioned in myth and legend

The “Emerald Tablet”, also known as the “Secretum Secretorum” (“The Secret of Secrets”) is an ancient sacred text carved into a solid emerald tablet, and is believed to reveal the secret of the primordial substance and its transmutations. According to mythology, it is the work of Hermes Trismegistus – a divine entity that is the combination of the Greek god Hermes and the Egyptian god Thoth. According to other beliefs, the Holy Grail is part emerald. 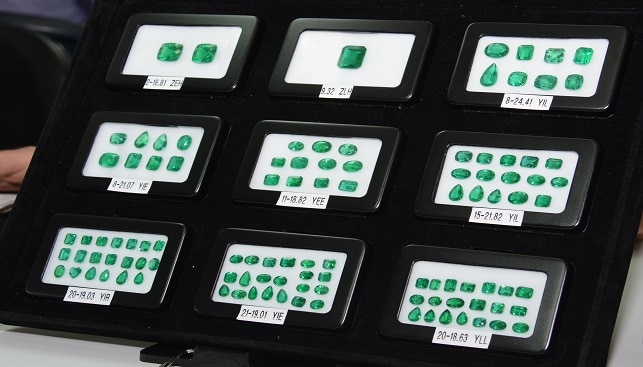